The most iconic cars used by celebrities on their wedding day

The couple said 'I do' in front of 500 guests and the wedding is rumoured to have cost over $4million as. As a wedding present, David Beckham gifted his 22-year-old son a £380k vintage Jaguar. In light of this, classic car insurance broker Heritage has looked back on the top five most iconic celebrity wedding cars in recent history.

Mark Wilkinson, Managing Director at Heritage comments: "Classic cars offer a timeless appeal, and they are a great choice because they offer some fun, flair and nostalgia to the day's celebrations, allowing the happy couple to fuse flamboyance and tradition"

Kate Middleton and Prince William
It was hard not to be impressed when Prince William arrived in a Bentley at his 2011 wedding to Kate Middleton. It was a Bentley State Limousine belonging to Her Majesty the Queen, herself. The car is one of only two ever made, making it one of the rarest on the planet.

Kate Middleton also made an entrance to remember arriving in a Rolls Royce Phantom VI, given to the Queen on her Silver Jubilee in 1977 and one of only 18 made for heads of state.

“The bride's arrival at the ceremony is perhaps the first time many of her friends, family members, and photographers will see her on the day. Months and sometimes years of planning go into this first moment that plays such a big part of the wedding day,” explains Mark.

They left their wedding in a stunning Aston Martin DB6 Volante convertible. It belongs to Prince Charles, the father of The Duke of Cambridge, who received it from the Queen on his 21st birthday. The cost of a standard design starts at £200,000.

Pippa Middleton and James Matthews
This pair also went with a classic for their wedding. When the Duchess of Cambridge's younger sister married her Fiancé in May 2017, her choice of wedding car was a stunning and very classic vintage 1951 Jaguar MK V.

Kim Kardashian and Kris Humphries
Speaking of royalty, the queen of American reality TV and pop culture, Kim Kardashian, chose a Rolls Royce Phantom Coupe as her wedding car to her short-lived marriage to Kris Humphries in 2011. Of course, she didn't just hire one car but a whole fleet of them to transport her and her wedding party to the venue.

Despite famously only remaining married for 72 days, the wedding of the reality star and former professional basketball player is said to have cost over $10million.

Benedict Cumberbatch and Sophie Hunter
When the Hollywood actor married his fiancée last year in a secret ceremony on the Isle of Wight, the happy couple chose a stunning Mark VII Jaguar as their wedding car.

However, when the car was pictured pulling up to the venue without either the bride or groom, some have speculated whether it was really used, or it was just a clever ruse to divert attention. A mystery perhaps only Sherlock Holmes himself could solve.

Kate Moss and Jamie Hince
Kate Moss used a fleet of 6 Rolls-Royce Silver Shadows to transport all 15 Bridesmaids to their Cotswolds Wedding before being whisked away to her Honeymoon in a Helicopter.

Mark says "Choosing the right vehicle for your wedding should be a fun experience that allows you both to express your style.” 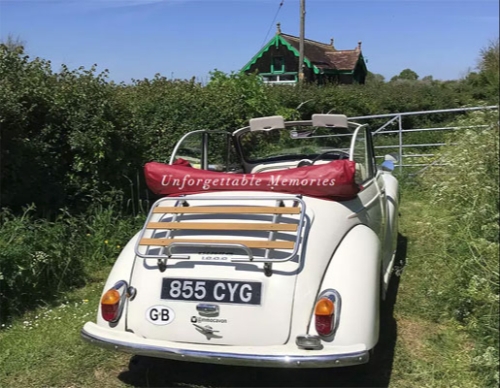 Pantone’s Colour of The Year - we love it!

Pantone's Colour of The Year, Viva Magenta, is oh-so gorgeous and perfect for wedding colour palettes...

Gather family and friends together for a magical Christmas and New Year spent in the...

Just in time after the influx of festive proposals, Paper Crane Unique has announced the release of...

Following on from the success of the collection last year, Cheltenham's Vanilla Pod Bakery has...

We have a great line up of experts to give you first hand advice and discussions about bridal fashion, hair, makeup, to name but a few!

Take a look at our Celebrity Interviews!